The Cork City Local Economic & Community Plan (LECP) 2016 – 2021 will be is an action driven plan used to guide economic and community development in the city over the next six years. This plan will seeks to build on the structures, work and achievements of Cork 2012 – Imagine Our Future (Cork City Council, 2001) and on the work of the Cork City Development Board.  Imagine Our Future was central to generating the delivery of creative initiatives such as the Cork City Lifelong Learning Festival, Cork Healthy Cities, the Discovery Science Exhibition, the Interagency Traveller Group and inter agency work on LGBT in the city.

This LECP will drive a series of actions to progress communities and stimulate economic development at a local level, within this strategic context. The plan is very much based on a multi-agency approach that will require both cross-sector input and cross sector ownership.

While this plan recognises and reflects the importance of spatial development, it is not a spatial development plan. The forthcoming National Planning Framework (NPF), the Southern Regional Spatial and Economic Strategy (RSES) and the existing Cork City Development Plan 2015-2021 will provide the strategic guidance for sustainable land use planning for the city. 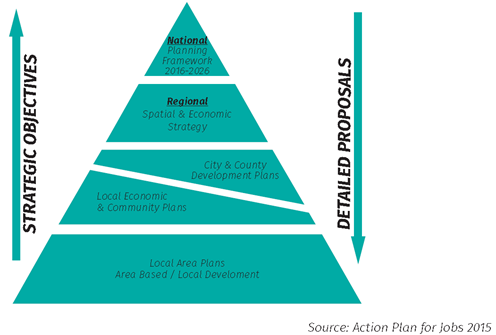 In accordance with the Local Government Reform Act 2014, the implementation of this LECP shall however be consistent with the following:

All future reviews of the LECP, and the objectives and actions therein, will provide the opportunity to confirm consistency with the forthcoming National Planning Framework (NPF) and the Southern Regional Spatial and Economic Strategy (RSES).The preparation of any lower tier plans or strategies may need to be subject to SEA and AA processes as appropriate.

In addition, the LECP is the framework for Local Development Strategies and other plans under the auspices of the LCDC. It also serves to inform a range of statutory and collaborative integrated planning processes.

Due consideration has been given to the requirements for Strategic Environmental Appraisal (SEA) and Appropriate Assessment (AA) during the preparation of this plan and screening has been carried out for both[1].  The preparation of any lower tier plans or strategies may need to be subject to SEA and AA processes as appropriate.

[1] Please refer to the full SEA and AA screening reports that accompany this plan.

What is an LECP?

The passing into law of the Local Government Reform Act 2014 necessitated a number of changes to the administration of local government in Ireland. Among the more significant of these developments was a new statutory requirement that Local Authorities should prepare an integrated Local Economic and Community Plan (LECP), comprising specific economic and community elements, in accordance with the principle of sustainable development. These plans are to provide a service delivery planning framework over a six-year period.

In order to support the implementation of the LECP, the Minister for the Environment, Community, and Local Government, issued guidelines to Local Authorities on the preparation of the plan. These guidelines set out a five stage process for developing an LECP: 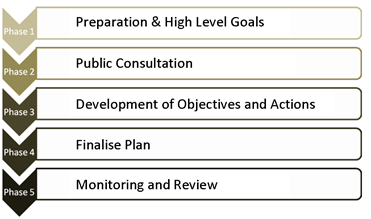 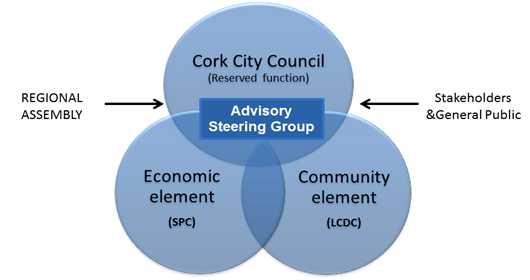 Guiding Principles of the LECP

The LECP is underpinned by the following guiding principles, which were identified as part of Socio-Economic Statement that initiated the making of this plan:

The plan will seek to integrate these guiding principles by focusing on the following types of actions:

In implementing these actions, tThis plan’s actions will need to have due regard to the nature of the action, the partners tasked with implementing the action and their level of ability to achieve that action. In doing so, it is hoped that every effort is made to ensure this LECP is both practical and implementable.

Strategies for the City

The Cork City LECP needs to represent a shared plan for the city, one that shapes and it will play an important role in shaping Cork as a world-class city of creativity, investment and opportunity, a city that offers a superior quality of life. This will require commitment from all partners to make making the plan a living document with ongoing reflection, review, monitoring and consultation at local level.

To achieve this, Cork City LECP will aims to ensure inter agency collaboration, connectivity and synergy between all the strategies and action plans at work in the city:

Strategies at Work in Cork City 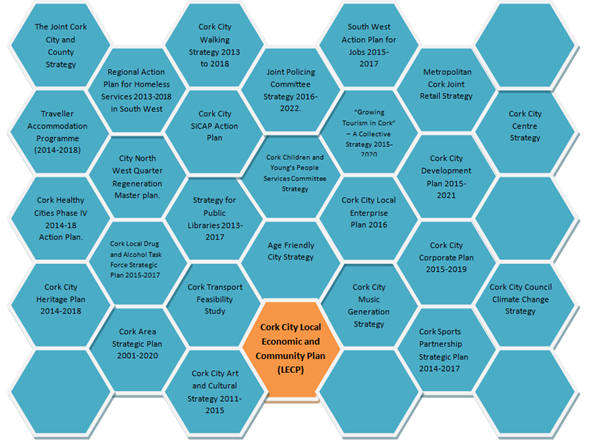 Figure 4: Honeycomb of strategies at work in Cork City

Consultation processes need to play have played a central role in the development of the LECP for the city. There has always been evidence of strong collaboration across agencies, social partners and the local development and community development sectors in Cork City. This LECP needs to represent a strengthening of these collaborations, allowing for shared ownership, policy consistency and the achievement of common goals for the good of the city. The consultation process involved in the formation of the plan, commenced early in 2015 and involved intense engagement with a wide and varied range of economic and community stakeholders at work in the City:

Commencing in October 2015, the Social Inclusion Unit began the process of wider consultation to inform the delivery of this plan. There had been 19 submissions to the LECP Socio Economic Statement and this formed the basis of the wider consultation.

Global contact was made by the Social Inclusion Unit with all agencies, voluntary groups and statutory bodies in Cork City. One-to-one stakeholder consultation took place to further develop objectives and actions with submissions invited and collated for review by both steering groups (LCDC and SPC).

Both strands of this plan have been based on bottom up input, with a diverse range of stakeholders having a central role into the plan making process:

An Advising Steering Group was established consisting of members of the SPEDE (Strategic Planning, Economic Development & Enterprise SPC) and LCDC (The Local Community & Development Committee). The Advisory Steering Group, met to lead and guide the initial planning process.  The LCDCD and the SPEDE SPC then both held a serious of meetings, central to delivering this plan. Separate workshops of the LCDC, the SPEDE SPC and elected local authority representatives (19th April), delivered the drafting of this plan. A joint workshop of the SPEDE SPC and the LCDC (16th May) took place to agree on overlapping community and economic issues set out in this plan.

A total of 19 members of the public made a submission to the Socio-Economic Statement which was placed out for public consultation in August 2015. Initial findings from the recent CorkCitiEngage survey of over 3,500 persons in wider Cork region were also used to inform this plan.

A workshop with a cross section of employers, educational providers, business interest groups and state body representatives was held in City Hall on the 21st April 2016.

Focus groups and one to one interviews with senior level representatives

One to one submissions with a range of networking bodies and collaborative structures across the city, representing sectors such as employers, children/young people, policing, and older people.

Submissions were made received and one to one consultation took place with national representative bodies.

Figure 5: A sample of stakeholders engaged in the LECP consultation process.

Under the European Communities (Environmental Assessment of Certain Plans and Programmes) Regulations 2004 (S.I. 435 200 of 2004 as amended by S.I. 435 of 2011), all plans which are likely to have a significant effect on the environment must undergo screening to determine whether a SEA is required. “Screening” is the process for making a determination as to to determine whether a particular plan, would be likely to have significant environmental effects, and would thus warrant SEA. This Draft Plan has been screened for SEA and it is currently determined that full SEA is not required, which concludes that the LECP is not considered likely to have a significant impact on the environment and therefore a SEA is not required. The screening report that accompanies this Draft Plan and will be updated as relevant throughout the Plan-preparation process.

An Appropriate Assessment screening  has been undertaken for this plan in accordance with the requirements of Article 6(3) of the EU Habitats Directive (directive 92/43/EEC) to determine if the LECP is likely to significantly affect Natura 2000 sites (i.e. Special Areas of Conservation (SAC) and Special Protection Areas (SPA)) within or surrounding the plan area. The emerging conclusion of the AA screening process is that further (‘stage 2’) AA is not required. The screening report accompanies this Draft plan and will be updated as relevant throughout the Plan-preparation process.

2 submissions have raised observations relating to this chapter