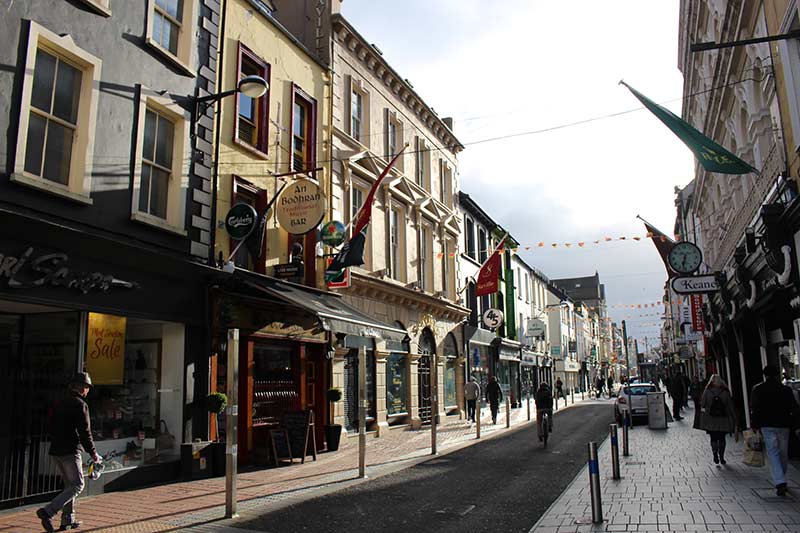 The City Development Plan is required to set out a strategy for the growth and development of the city which is consistent with national and regional policy. Since the adoption of the current City Development Plan significant changes have occurred in the policy and regulatory environment for land use planning in Ireland. Of particular note was the adoption of Project Ireland 2040 National Planning Framework (NPF) in 2018 and the Regional Spatial and Economic Strategy for the Southern Region (RSES) in 2020, which also contains the Cork Metropolitan Area Strategic Plan (MASP).

These statutory plans are aligned in setting out unprecedented and ambitious growth targets for Cork City which seek to harness its potential to achieve balanced regional development that counterbalances the growth in the Greater Dublin Area. The Cork Metropolitan Area Transport Strategy (CMATS) will also be highly influential in planning the future of Cork.

There is significant alignment between the NPF and the UN Sustainable Development Goals (SDGs) and these Goals will also act as a foundation for the Cork City Development Plan. Regard will also be had to national plans and policies such as the National Climate Action Plan and the series of Guidelines for Planning

There are 17 Sustainable Development Goals (SDGs) set by the UN General Assembly in 2015 as a blueprint to achieve better and more sustainable development for all. As the NPF states: “sustainability is at the heart of long-term planning and the NPF seeks to ensure that decisions we take today meet our own needs without compromising the ability of future generations to meet their needs”1. Development Plan polices can have a direct impact on achieving some SDGs, such as Sustainable Cities and Communities and Climate Action, and they can also have an indirect impact on the achievement of many other SDGs. Key goals and objectives in the new Development Plan will therefore be proofed against the SDGs. 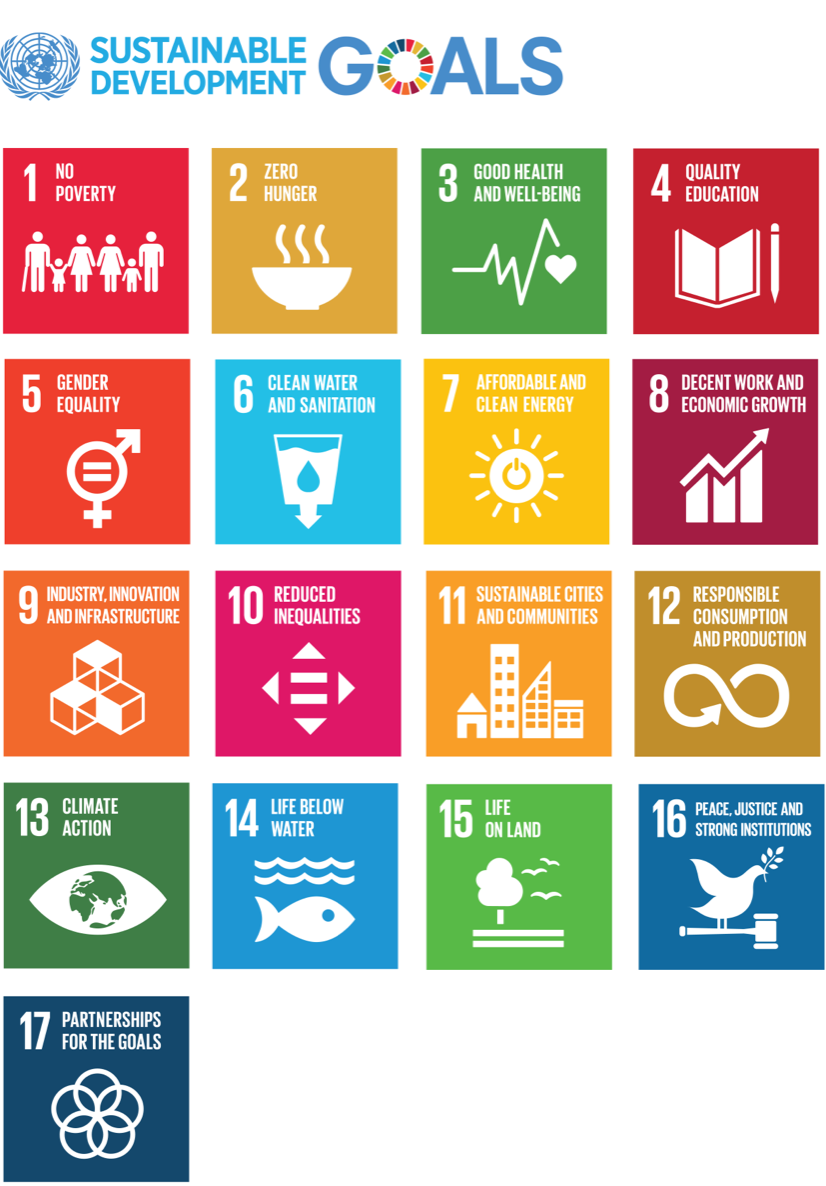 A national hierarchy of plans is now in place with the NPF being the overarching document. The NPF influences all spatial plans from national to local levels. The RSES sets out the mechanism for delivering the NPF at a regional level. The City Development Plan will provide an overall strategy for development for Cork City, whilst local area plans may be prepared giving more detailed planning guidance where required.

The diagram from the NPF, illustrates the hierarchy of plans and shows how EU and national legislation and policy, as well as local inputs, will feed into the preparation of the City Development Plan. 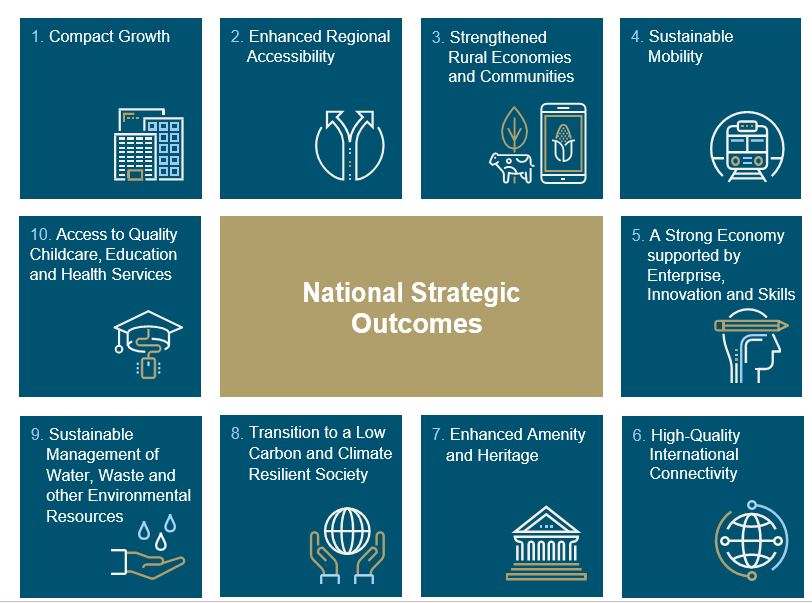 The NPF is a 20-year high level strategy to guide development and investment in Ireland. The vision, as set out in the NPF, is the delivery of a regional focused strategy for managing growth and providing a counterbalance to the established concentration of growth in the Greater Dublin Area. To achieve this the NPF targets a level of growth for the other regions which combined will at least match the growth of Dublin and the East and Midlands Region. It also supports ambitious growth targets to enable the cities of Cork, Limerick, Galway and Waterford to grow by at least 50% by 2040 and sees them as drivers of regional growth.

Compact Growth is the first National Strategic Outcome (NSO) and it has particular significance for spatial planning policy, requiring at least 50% of growth in Cork City to be locate within and close to the existing ’built-up’ area. This will allow better use of underutilised land and buildings including infill and brownfield land, with higher housing and employment densities. Higher densities and compact development will need to be accompanied by improved employment opportunities, amenities, health, education and environmental services, supported by sustainable mobility, reflecting NSOs 4,5, and10. NSO 7 promotes enhancement of our natural and built heritage will help retain the unique character of our city.

The National Strategic Outcomes also emphasise that regional and international connectivity will contribute to development of a strong economy. The climate resilience and management of environmental resources outcomes will underlie the city development strategy

Meeting the ambitious targets whilst adhering to a ‘Compact Growth’ model will be a challenge and opportunity for Cork City that will need to be addressed in the City Development Plan and subsequent plans.

The NPF identifies a number of key growth enablers for Cork City which include:

The City Development Plan will focus on delivery of many of these enablers and it is recognised that significant support from the public and private sector and investment in infrastructure and services will be required to make them happen. 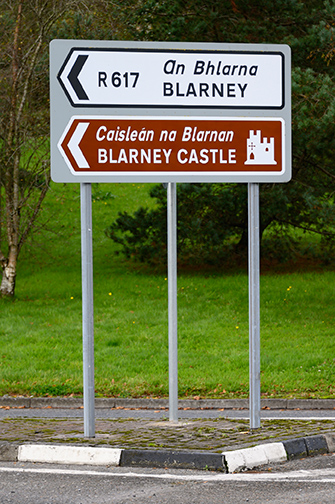 2.5. Regional Spatial and Economic Strategy for the Southern Region (RSES)

The RSES is a strategic regional development framework supporting the programme for change set out in Project Ireland 2040. As the regional tier of the national planning process it ensures coordination between the National Planning Framework and the City Development Plan. The central themes of the RSES are place making, climate action and sustainable economic opportunity and growth. It states: ‘Our cities are the pillars on which to base the RSES settlement and economic strategy’.

The RSES sets out a settlement hierarchy for the region and population targets for Cork and the other cities to 2026 and 2031. It contains a large number of Regional Policy Objectives (RPOs) which the City Development Plan will aim to achieve. The RSES also identifies key enablers, similar to those in the NPF, that are designed to underpin Cork City as the primary urban centre of the region. Importantly RSES supports Cork City’s ambition to develop as a city of international scale. The RSES reinforces the National Strategic Outcome of high quality international connectivity through supporting investment and increased capacity in the regions ports and airports and provision of high quality digital connectivity It supports the TEN-T network and the continued capital investment proposed in the and Port of Cork’s Strategic Development Plan including redevelopment of existing facilities in Ringaskiddy and preparing City Docks and Tivoli Docks for regeneration. It also supports Cork airport as one the regions two international airports and a driver of growth in the region. 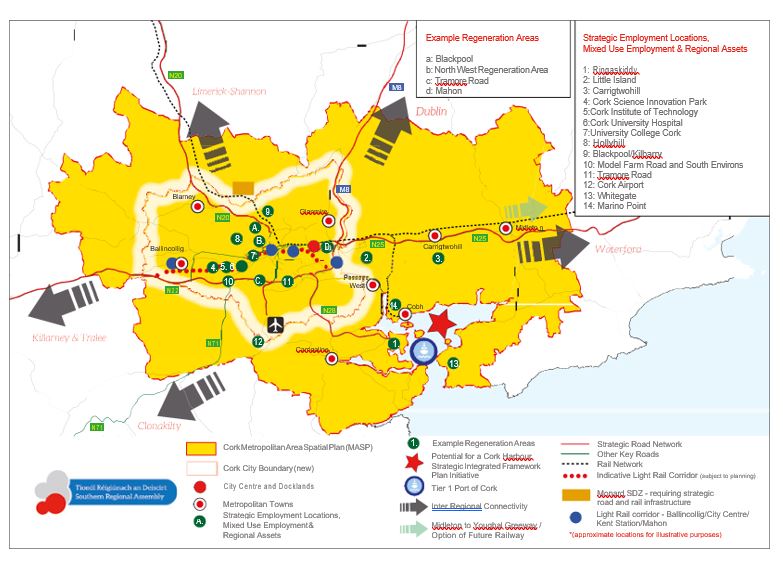 Volume 2 of the RSES contains the Cork MASP which sets out principles and policy objectives to guide investment and sustainable development across the entire metropolitan area. The NPF states that Cork requires significantly accelerated and urban focused growth to more fully achieve its role as an international centre of scale to complement Dublin. The MASP reinforces this and states that the level of growth envisaged for Cork (Cork City to grow 50-60% by 2040 to 336,000 people uniquely positions the Cork Metropolitan Area as:

The MASP population targets for the overall Cork Metropolitan Area envisage a growth of 104,657 people by 2031. Most of this growth will occur in Cork City, which would see an uplift in population of up to 75,000 people, to give a total of 289,000 people in Cork City by 2031. This will require commensurate growth in employment with close to 65,000 extra jobs needed in the Cork Metropolitan Area.

The MASP recognises that the concentration of this level of growth in Cork will require significant and concentrated investment in supporting infrastructure to deliver the houses, jobs and services required to meet the role and targets set out for Cork. It includes a range of specific objectives to deliver transport, environmental services, energy, flood protection, cultural, and amenity infrastructure, among others, which will be incorporated into the Development Plan. 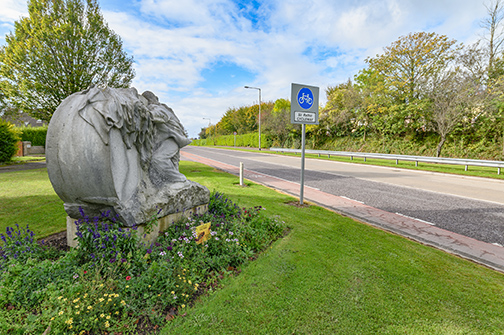 CMATS, adopted by the National Transport Authority (NTA) in February 2020, sets out a transport strategy for the Cork Metropolitan Area up to 2040, which is in keeping with the National Planning Framework and envisages a €3.5billion investment in transport infrastructure and mobility in Cork. CMATS assumes a close integration between land-use and transportation plans and aims to prioritise sustainable transport and reduce car dependency. It seeks to provide a high level of public transport connectivity to key destinations, increasing modal share of public transport from 10% in 2011 to 26% by 2040.

It proposes a new Light Rail System (LRT) from Ballincollig to Mahon, via the city centre and docklands, which will be a gamechanger for Cork and will serve a catchment reaching 32% of the Cork Metropolitan Areas population and 60% of jobs. Major upgrades to the capacity and frequency of the citywide bus services and to the commuter rail service (serving 19% of population and 30% of jobs) are also planned. CMATS also aims to see a 63% increase in walking trips by 2040 and an sees potential for an additional 56,000 car trips transferring to cycling by provision of appropriate infrastructure and facilities. Whilst taking its lead at national level from the NPF and the National Development Plan, CMATS builds upon previous transport studies for the region including Cork City Centre Movement Strategy, Cork Area Strategic Plan (CASP) and the Cork Metropolitan Cycle Network Plan. 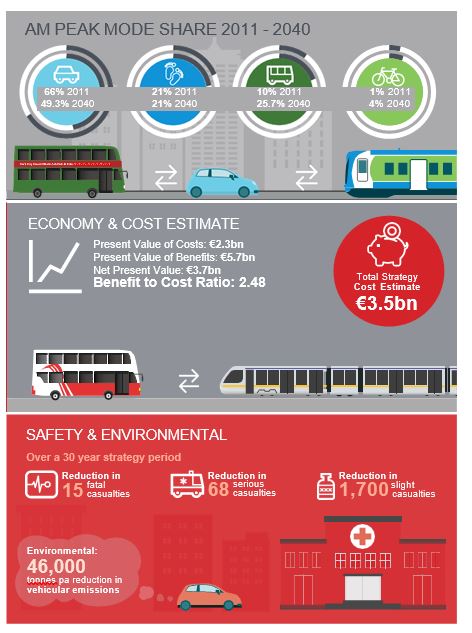 CMATS also aims to protect key strategic routes for the transfer of freight and services including the provision of a high-level freight access to the Port of Cork. It includes 50km of National Road network improvements and 70km of Regional Road improvements, including the Dunkettle Interchange, the M28 Cork to Ringaskiddy Road, the Cork North Ring Road and distributor roads to the north and south of the city.

The strategy provides a coherent transport framework and implementation plan around which other agencies involved in land use planning, environmental protection, and delivery of other< infrastructure such as housing and water can align their investment priorities. More details on CMATS are outlined in the Connected City section of this document.

Climate Change impacts are currently experienced worldwide and coastal areas in western parts of Europe such as Ireland can expect more heavy rain, higher risk of flooding from rivers and higher risk of storms in winter. Cork City is particularly vulnerable to river and tidal flooding, drought, colder winters as well as surface water flooding arising from heavy rain.

The national Climate Action Plan sets out a course of action to address the impacts of climate change on Ireland’s environment, society, economic and natural resources. The Plan identifies the scale of the challenge and examines impacts on a range of key sectors including Electricity, Transport, Built Environment, Industry and Agriculture and charts a course towards ambitious emission reduction targets. Cork City Council adopted and is implementing a Climate Adaptation Strategy for the city and will also be undertaking a Climate Action Plan. Climate change will be a cross-cutting theme with implications for all parts of the new City Development Plan and is addressed further in section 5 of this document. 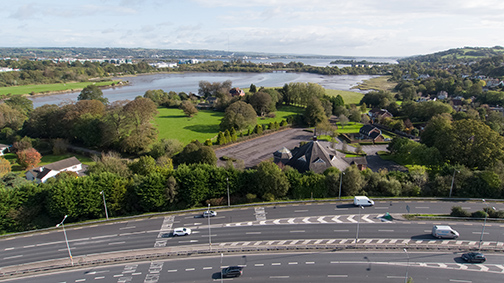 The Minister for Housing, Planning and Local Government issues statutory guidelines from time to time to planning authorities. who must have regard to them in carrying out their functions, including in the preparation of the City Development Plan. They cover a wide range of issues including architectural heritage, childcare facilities, landscape, residential density and design, environmental assessment and development management.

11 submissions have raised observations relating to this chapter