Climate change refers to a change in climate patterns that has been apparent from the mid to late 20th century onwards. This is largely attributed to the increased levels of atmospheric carbon dioxide (CO2) produced by the use of fossil fuels, resulting in numerous global climatic shifts.  There is broad scientific consensus that human activities, most notably the burning of fossil fuels for energy, has led to the rapid build-up in atmospheric greenhouse gases, which is causing average global temperatures to rise as presented in Appendix A.

Impacts from this warming have already been observed and include increases in global average air and ocean temperatures, accelerated melting of snow and sea ice, widespread retreat of glaciers, rising global average sea level, and extensive changes in weather patterns, including changes in precipitation levels and increased storm intensity. Climate change is the greatest environmental threat confronting the world and is impacting on the lives of hundreds of millions of people globally as illustrated in Figure 1.2 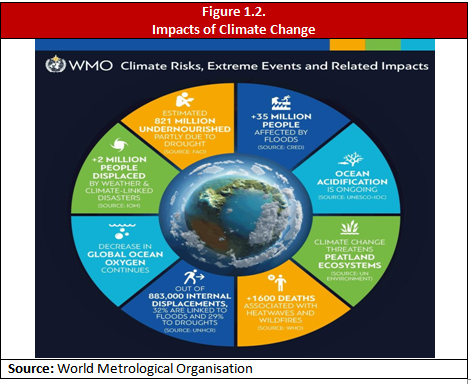 As illustrated later these impacts are evident in Cork City.