This strategy is set within a policy framework at international and national levels as illustrated below.

Climate change has been on the international political and policy agenda for a number of decades.  In 1992 the United Nations agreed a framework on climate change.  The Kyoto Protocol, which was agreed in 1997 is based on the principle of common responsibilities to address climate change.  By 2013 the EU published a white paper on a climate change adaptation strategy which seeks to contribute to a more climate resilient Europe.  Specific targets were set in the 2015 Paris Agreement to limit global warming to 2% above pre industrial levels and to build resilience and mitigate climate change.  In addition, 9000 cities and local governments, including Cork City Council, are signatories to the Global Covenant of Mayors for Climate Change.

The 2012 National Climate Change Adaptation Framework (NCCAF) was Ireland’s first step in developing a national policy on adaptation actions to combat the impacts of climate change. The 2014 National Policy Position on Climate Action and Low Carbon Development restated the policy position of the NCCAF.  The Climate Action and Low Carbon Development Act 2015 provides the statutory basis for the national transition objective laid out in the National Policy Position. Further to this, it made provision for and gave statutory authority to both the National Mitigation Plan (NMP), published in 2017 and the National Adaptation Framework (NAF) published in 2018. The NAF has also identified twelve sectors across seven government departments/agencies which are required to develop specific climate adaptation strategies, which will include actions to be implemented at a local level. See Appendix B for a table of the sectors and their parent departments.  As previously stated, this draft Climate Change Adaptation Strategy represents Cork City Council’s part of the National Adaptation Framework.  In June, 2019 the Government published the ‘Climate Action Plan 2019 – to Tackle Climate Breakdown’ which presents a suite of actions designed to address climate change.

The Southern Regional Assembly is currently preparing a Regional Spatial and Economic Strategy (RSES) for the Southern Region, for the period 2019-2031.  The RSES will provide a long-term regional level strategic planning and economic framework, which will support the implementation of the National Planning Framework for the future physical, economic and social developments for the Southern Region. The following key themes of the draft RSES are directly related to Cork City’s Climate Change Adaptation Strategy:

Cork City Council is responsible for developing, communicating and delivering this Cork City Council Climate Change Adaptation Strategy. Following the boundary extension that came into effect on 31st May 2019, the population of Cork is 211,000. The geographic area has expanded almost five-fold as illustrated in Figure 1.4. below.  The red-hatched area in Figure 1.4 below shows Cork City Council’s jurisdiction pre-31st May 2019.  The Draft Regional Spatial Strategy population projections are forecasting a population increase to between 274,000 and 286,000 by 2031 and the NPF sets a population target for Cork City in the region of 350,000 people by 2040. 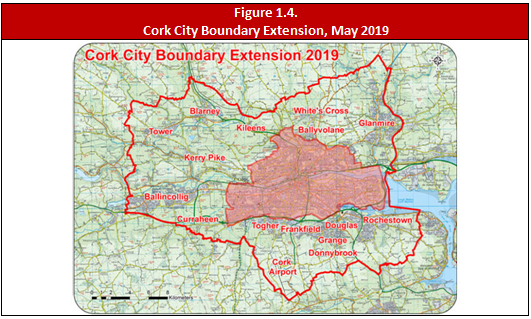