4. Shaping the Structure of the City 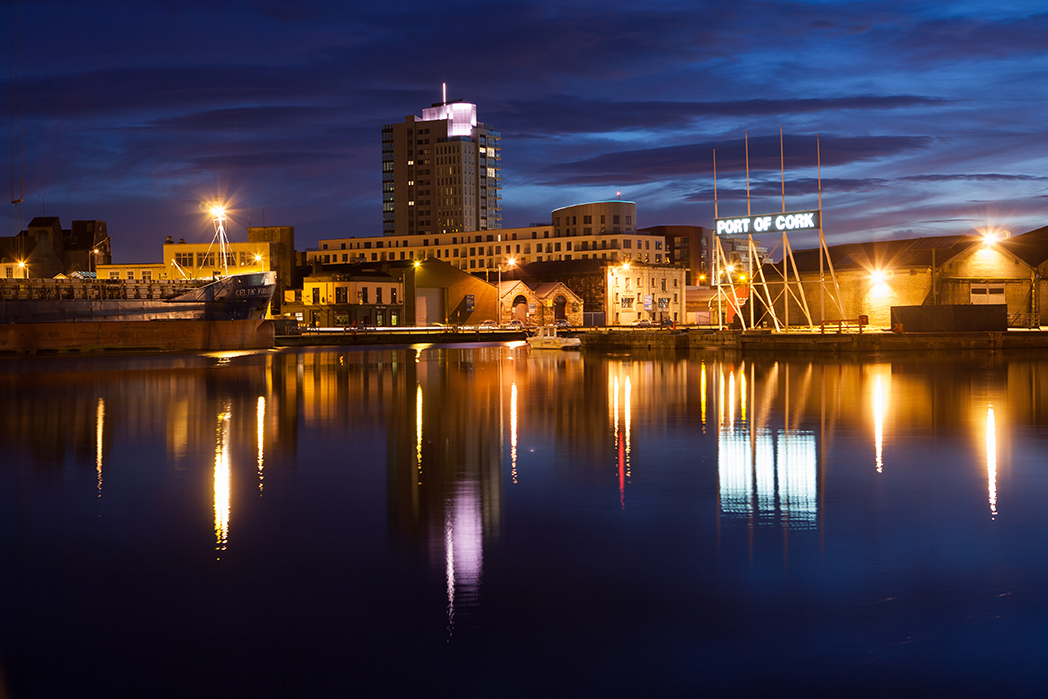 The Cork City Development Plan will provide the framework for shaping the future structure of the city for 2022 - 2028. To do this, the plan will need to be driven by a very clear set of principles, including those illustrated below. 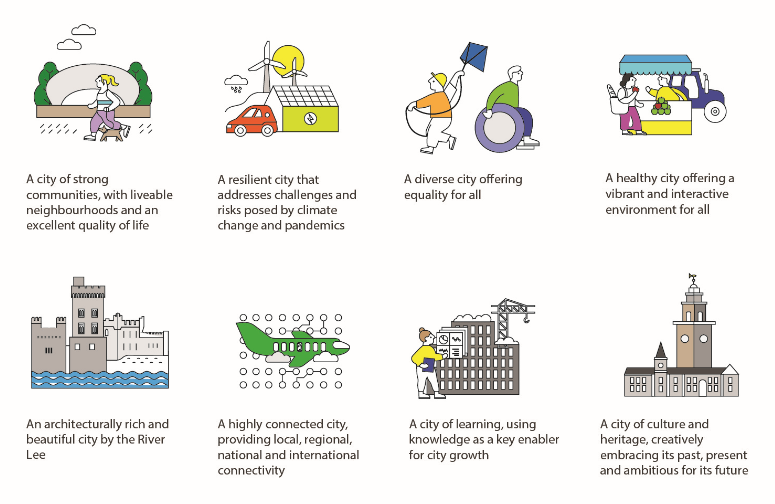 The Core Strategy is the heart of the plan, setting out a framework for spatial growth of the city. It will be based on population, housing and job targets and other guiding policies set out in higher level planning documents, like the National Planning Framework (NPF) and the Regional Spatial and Economic Strategy (RSES). The delivery of compact growth that aligns with national and regional planning policy, alongside sustainable mobility and climate resilience will be key components of the next Core Strategy for Cork City. 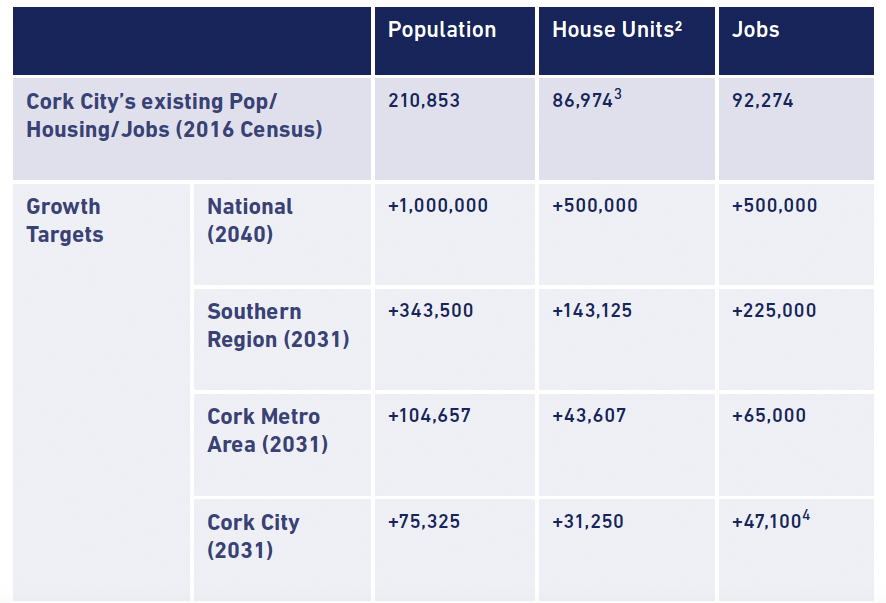 The strategy will set out key locations for future developments that provide the right mix of uses for an area, including housing, employment, community, amenities, education, health and social services, cultural facilities, sports and recreation facilities and other infrastructure. It also seeks to ensure that the right amount of land is zoned, serviced and available in the right locations so that homes, community services, places of employment and other supporting uses are provided at the right scale and balance, in line with the carrying capacity of the local environment.

The successful delivery of the next Core Strategy will also be heavily dependent on other factors including critical investment in key infrastructure and services and the collective ambitions and abilities of the public, private and community sectors. A wide range of government departments state and local agencies, community groups and bodies and other stakeholders will need to come together to inform, embrace and implement the next Core Strategy.

4.3. The Current Structure of Cork City

The current structure of Cork City provides the urban and social fabric within which the present city functions. It is also the starting point from where the future city will grow. Cork City’s characteristics and form are key determinants for future growth and can be better understood by dividing the city into the following five areas, which are illustrated in the map below:

The population living in these five areas of the city varies considerably. The City Centre accounts for nearly 12% of the city’s overall population with significant capacity for future growth, most notably in City Docks. The surrounding City Suburbs are a dense collection of neighbourhoods collectively accounting for two-thirds of Cork City’s population total. The five RAPID areas all form part of the City Suburbs, and together account for nearly a quarter of the city’s total population. The four Urban Towns account for 16% of the city’s population, with Ballincollig accounting for over half of this. The City Hinterland is the largest area by land mass but accounts for only 5% of the overall population living in Cork City. 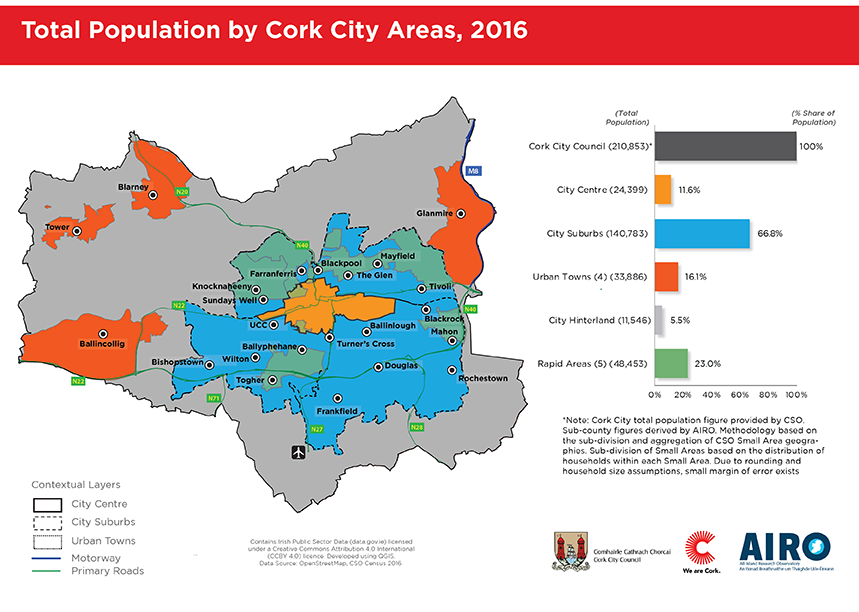 City neighbourhoods are the building blocks of all cities, being a combination of local places, spaces and homes that collectively form and inform the connection between a city and its people. ‘Liveable City Neighbourhoods’ are places where these elements combine to enable positive social connections. They are based on a combination of factors that have repeatedly proven to create a happy place to live. Some examples of these factors include;

A key objective of the Cork City Development Plan is to ensure that each neighbourhood, which collectively form Cork City, are attractive places to live, work and interact. The recent 19% increase in population living in Cork City Centre, being four times the growth rate for the overall city 2, reflects the demand for living in urban neighbourhoods that are highly accessible to employment, culture, recreation and other city attractions and events. The planning and development of ‘Liveable City Neighbourhoods’ will be a primary ingredient in achieving a more sustainable and resilient Cork City. 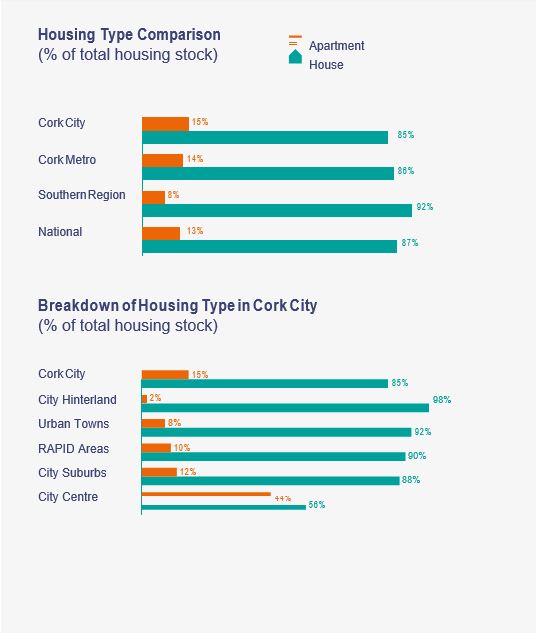 Housing is an essential element in creating ‘Liveable City Neighbourhoods’. Cork City currently has a diverse range of housing types and tenures that differ greatly by location across the city. Understanding the nature and mix of households3 that form these neighbourhoods is an important starting point in planning for the future development of more liveable neighbourhoods. 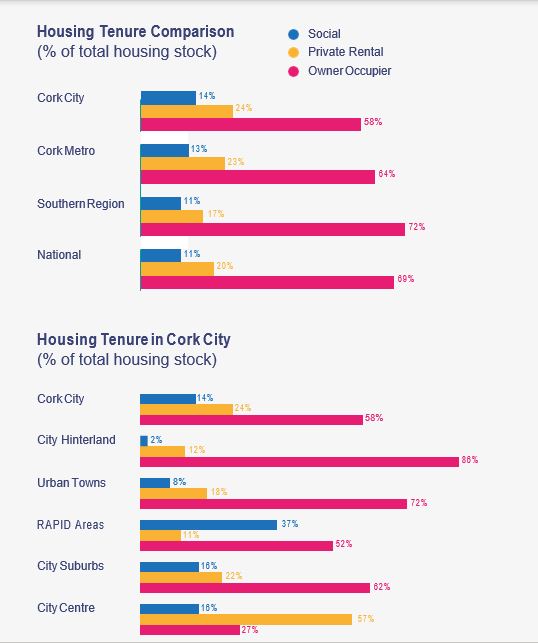 Cork City Council is currently undertaking a City Capacity Study 4 to help identify parcels of lands currently zoned, both within the built-up area and ‘greenfield’ land, that have development potential. To date, this study has identified over 1,200 Ha. of zoned lands throughout the city which are considered underutilised or undeveloped. In addition to these lands, further sites have been identified which have development potential, but the delivery timeframe is difficult to ascertain given the nature of existing uses (e.g. low order industrial parks, older institutional uses, etc.). 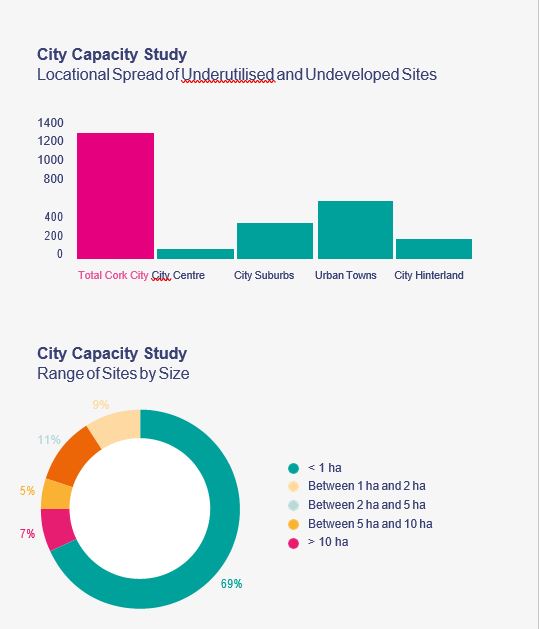 Much of the land identified is serviced or serviceable and developable in the short and medium term, including many infill sites and brownfield sites in the built-up area. Other lands require servicing upgrades and the next step in the City Capacity Study will be to complete the assessment of infrastructural and other constraints to gain a more comprehensive understanding of both the viability and potential time constraints in delivering future development on these sites.

The study’s findings show that Cork City has considerable land capacity to deliver the housing and employment targets set out in both the Southern RSES (up to 2031) and the NPF (up to 2040), during the next City Development Plan period and beyond 5. Investment in infrastructure will be critical in realising these targets, as will an integrated planning approach involving multi-stakeholder engagement, from national to local level.

The sites identified in the study to date are spread across the city. Collectively the four urban towns of Ballincollig, Glanmire, Blarney and Tower have the largest total area of underutilised and undeveloped land identified. However, the higher density future developments planned for in strategically important brownfield sites identified in the City Centre, including City Docks 6, will result in the delivery of much higher yields of residential units and employment floorspace within these central and highly serviced areas. Regenerating brownfield lands identified in the City Suburbs, including Tivoli Docks 7, will further help to realise the objective of more compact urban growth. A number of zoned expansion areas are also identified within the City Hinterland, being located alongside serviced and accessible locations.

There is a wide range of site sizes identified in the City Capacity Study to date. The majority are under 1 Ha. in size,< with this category accounting for over two thirds of the overall total. Smaller sites are predominately located in the City Centre and City Suburbs. Over 12% of sites identified to date are 5 ha. or greater, with 7% being over 10 ha. Most large sites are located in the Urban Towns and the City Hinterland, apart from the strategically important regeneration areas of City Docks and Tivoli Docks.

The City Capacity Study will provide an additional evidence base to inform the delivery of the new Core Strategy. This work can also be integrated into Cork City Council’s Active  Land Management processes, helping to implement the Core Strategy. In doing this, Cork City Council is seeking to embrace new ways of actively progressing the ambitious growth targets, thereby enhancing Cork City’s role as the heart of both the Cork Metropolitan Area and the Southern Region.

4.6. Shaping the Structure of the City

The City Capacity Study and the Core Strategy will directly inform the wider land use strategy to be delivered within the plan, helping to deliver more ‘Liveable City Neighbourhoods’, both within the plan period (2028) and beyond (up to 2040). In doing this, the plan needs to reconsider the structure of the city and how best to build on the pattern of existing neighbourhoods and communities. The plan will aim to enhance their ability to act as ‘Liveable City Neighbourhoods’ through the delivery of mixed-use developments that are appropriate to their location in terms of type, scale, form and density. The plan will also need to fully consider how best to allocate ambitious population growth targets, based on the existing spread of population across the city.

The findings from the City Capacity Study show the wide range of brownfield infill and regeneration opportunities in Cork City, as well as some opportunities for phased greenfield development in sustainable locations. The plan will consider appropriate land use policies, objectives and actions to help regenerate and develop these sites, including:
• Delivering regeneration of sites of national strategic importance (e.g. City Docklands and Tivoli Docklands

In doing this, the plan will require new thinking. Cork Docklands (City Docks and Tivoli Docks) comprise a nationally significant urban regeneration and development opportunity that is key to the future of Cork City and Metropolitan Area, as well as to the realisation of the NPF. The development of the Cork Docklands is therefore inextricably linked t Ireland’s success and to the development of Cork City and its ability to achieve the ambitious growth targets set out for it in the NPF, as well as aiding Cork to become a city of< international significance by virtue of its scale and quality. Cork Docklands is key to delivering the proposed tram (LRT) system for Cork (set out in CMATS 2020), will be a strategi employment and residential location for Cork City, as well asreducing Cork’s carbon impact. Cork City aims for the Cork Docklands to achieve the implementation of innovative design and development responses to the environmental, housing, transport and placemaking challenges facing Irish cities. This ambition will require Cork City Council to work collaboratively with all of its partners, including the Government of Ireland, to frame development strategies and progress the delivery of projects that will be of a quality that Cork can be proud of, including the provision of enabling infrastructure and the provision of new public spaces to benefit the wider city.

Other strategically important brownfield sites will be identified and planned for to help achieve targets for compact growth and sustainable mobility. City Neighbourhoods and Urban Towns with capacity for increased compact growth will be identified. Innovative polices will be needed that focus on city regeneration that increase densities while respecting the city form. The significant potential that exists in bringing vacant upper floors back into use must be prioritised, most notably within the City Centre Island. Serviceable expansion areas within the city that can be accessed by sustainable mobility will also need to be considered for strategically phased development.

27 submissions have raised observations relating to this chapter